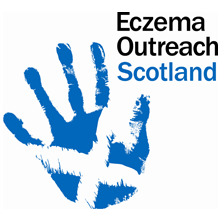 We recently produced two films for Scottish-based charity, Eczema Outreach Scotland (EOS). Over the course of a year, we documented the wonderful events and peer-support meetings that the charity hosts for all of its members, giving families the chance to have a fun day out, speak to dermatologists, and get to know other families who are suffering in the same way they do. They can share stories, tips, advice and meet face to face for possibly the first time, supplementing the closed facebook group that EOS supports for members. These events and sessions really prove invaluable for everyone involved, and it was a pleasure to document the work.

Our first film focuses on the peer-support element of the charity, with the Mitchell family as our case study in the film.

The hands were created by animating the EOS logo in After Effects, and tracing the movements in the original video of the children and superimposing them.

Our second film focuses on the Atopic Art project which was done in conjunction with ASCUS and two Scottish artists – Trevor Gordon and Josie Vallely. It is the making of an eczema inspired community art project, involving members of Eczema Outreach Scotland in partnership with artists and ASCUS.

‘Atopic Art: Expressions of eczema’ is a partnership project between ASCUS Art & Science, Dr Sarah Brown and Eczema Outreach Scotland. The project first began in early 2015 with ASCUS commissioning artists Trevor Gordon and Josie Valley to deliver participatory workshops to families affected by eczema at venues across Scotland. From these workshops, and through further consultation with Eczema Outreach Scotland and their members, the artists developed new artwork inspired by the individual art created by participants during the workshops, and based around the theme of ‘living with eczema’. Trevor and Josie creatively incorporated the participants artwork into the final pieces, and worked beyond this to develop new ideas that reflected both the ideas that emerged from this process, along with works inspired by personal expressions of their own experiences of living with eczema. Together the works created by Trevor and Josie reflect both the emotional and scientific impact of the condition on sufferers.